Printing from a Docker Container!? Why would someone want to do that?

Well it turns our that as part of a “Document Production” system we had, it was possible to configure automatic print jobs from the mid-tier of our application.

We had not long moved our development and integration environments over to Docker and, utilising Jenkins multi-branch pipelines, we had the ability to spin up identical Docker environments for each branch of the application that we had in Git.

The next step was to provision a QA environment from the master branch using the same system. To prove that the environment would be adequate for QA testing, we had to prove that we could accommodate a few of the more “interesting” scenarios in our QA regression test suite. Of course one of these scenarios was automatically printing documents from the mid-tier.

So what would this look like in our new environment? Well the first step was to make sure that we had CUPS installed in our containers. It was added to the CentOS Java base image we add our application to with a simple RUN yum -y install cups cups-pdf step added to the Dockerfile. Our Docker image contains a startup.sh script that is run on container start-up. This is defined in the CMD line of our Dockerfile. To this script /usr/sbin/cupsd -f was added to start the CUPS service. The image was then rebuilt and an attempt to access the CUPS admin page was made. In the compose file used when deploying the application, port 631 was exposed to try and allow access to the CUPS control panel web interface.

Alas this wasn’t quite enough to get us up and running. Whilst it was possible to access the control panel, any attempt to configure printers within it didn’t work. There were a number of additional steps to get a fully working control panel interface:

Now to get that on to the container…

Now you should be able to access a fully functioning CUPS control panel in the container from the browser of your host (at localhost:631).

So now we have CUPS running in the container and can configure printers and jobs within the control panel. Now we need to work out a way to deploy the container with pre-configured printer settings so that the application can print straight out of the box without a tester needing to do any extra configuration.

Within the /etc/cups/ directory there is a printers.conf file that is used to store printer configuration. Surely we could just go and steal the copy of this in our old environment and copy it in to our container using COPY printers.conf /etc/cups/ in the Dockerfile?

Here is an example printers.conf, replace <printer_ip_address> with your printer’s network IP address…

So with this copied across to the printer, we then set off a print job from the mid-tier to that printer name (2F_BWHP) and…

Whilst we have successfully printed from our container, the printer is just printing out many pages of garbage.

The printer we were trying to use here was an HP printer, and we clearly needed some kind of driver set up to get it printing properly. There are many drivers and tools for using CUPS with HP printers and after a lot of frustrating trial and error, the following method was used to configure the printer in our container.

You should now have something like the following being printed: 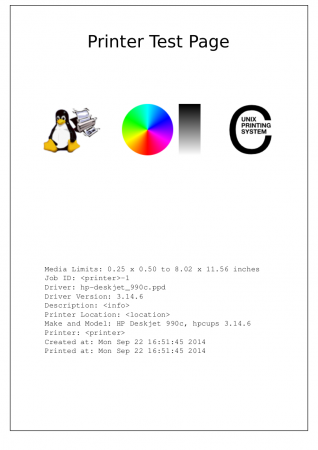 After a rebuild of our container image we now have CUPS installed and configured in the container and the appropriate printer configuration and drivers installed. We can now successfully print from a containerised version of our application mid-tier!

Some thoughts for the future…