It’s 2017 and I’m starting to get to grips with my new role as a Senior Developer. This new role contained new competencies aimed to encourage more involvement with the wider developer community. For me it seemed ideal place to start to do this was to run my own blog. Unfortunately after 3 months, and just 3 posts, progress stalled.

I’d been writing blogs internally for about a year or so and they seemed to be reasonably well received. Initially they were just to document interesting findings or celebrate successes that we had within the department. This gradually grew and became a place to share my views a number of topics that affected the way we worked. I’d also been given the chance to attend that year’s JAX London conference, a great chance to meet other devs and gather new ideas. As part of the deal, we’d agreed to blog our experiences for the company’s externally facing blog. The next logical step, therefore, seemed to be to create my own blog.

I had an old website lying around from some previous work I had done with a former flatmate, and the web hosting we’d used had space for me to start experimenting with my own site. The hosting, while seemingly great and award-winning when we’d bought it in 2014, looks rather old fashioned now. This limited what platforms I could use. Eventually I stumbled upon Jeykll, a ruby-based static site generator, and started writing.

Initially the posts were just documenting the steps I’d taken to get the site up and running, mostly talking about setting up Jekyll and adding various extra features to it. 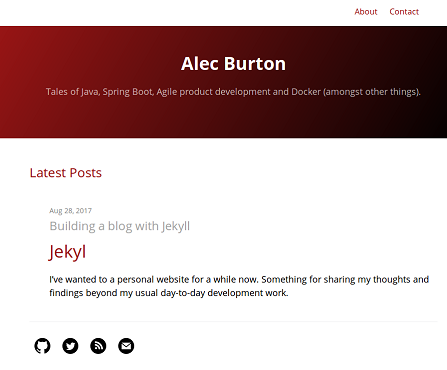 The next post is the only one I’ve saved for the new site, and the only one that had gathered much attention. This was a walkthrough of what I’d done recently with Docker containers to enable printing. Unfortunately, I’d rather rushed the writing of this post and a number of glaring typos were quickly found (and fixed!) by some colleagues.

Whether this had contributed or not, or whether I was just struggling to find time in my usual schedules to write, but at this point the writing stopped. I’d built a backlog of things I wanted to do with the site, and things I wanted to write about, but for one reason or another I just never got round to doing them. Not long after I was very fortunate to have been given the opportunity to take a step in to a line management position as a Principal Developer. Suddenly, not only did I have a brand new role with a lot of new things to learn and exciting opportunities to take, I’d also lost some of the incentive to get involved with the wider community.

As you may have noticed, I’ve now updated the site and started writing again! So what’s changed?

I’d kept reading about Hugo (an alternative to Jekyll) and how easy it is to combine this with Netlify. The advantages were clear: zero-cost hosting, easy HTTPS configuration and continuous delivery. My old setup was rather dated and required FTP’ing changes across after generating the site locally, making updating the site with new posts a bit of a pain and rather error prone. The documentation for both Hugo and Netlify is very good, so I won’t go in to details of how it went, but suffice to say moving the site over was pretty trouble-free and the continuous delivery means each new post is up within seconds of pushing changes to a GitHub repository.

I’m finally at the point in this role where I feel like I can share my experiences. The role has been equally challenging and rewarding and has pushed me to improve in almost all aspects of my career. There’s lots new experiences I want to share with people in similar positions or thinking about taking this route as the next step in their careers.

Lastly, I’ve done a fair amount of reading recently on how our habits and behaviors affect our lives. Books like Atomic Habits, The Power of Habit and Thinking, Fast and Slow, as well as various blogs, have given me new insight in to how I can create a writing habit within my current routines and hopefully stick to it!

Now the new site is up and running, watch this space…